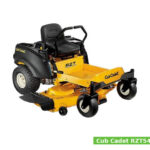 The Cub Cadet RZT 54 KH is a zero-turn mower model from the RZT series, manufactured from 2011 to 2012 by Cub Cadet (a part of MTD). It was available in two-wheel drive (2WD) version.