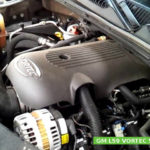 The GM / Chevy L59 engine has a V8 cast-iron block, two aluminum heads with 16 overhead valves (OHV), and a single camshaft. This engine used a sequential fuel injection system and “Coil-Near-Plugs” ignition system with a composite distributor and pressurized lubricating system with a wet sump. The engine is equipped with plastic (2002-2003) or stainless steel (2004-2007) fuel rail and electronic (Drive-by-Wire) throttle, except some 2002 models without traction control.

The GM / Chevy L59 engine has two aluminum heads with 2 valves per cylinder (16 in total) and a single camshaft driven by the crankshaft via a chain. The intake port has a cathedral shape with 200 cc intake runner volume and the exhaust has an oval shape with 70 cc exhaust runner volume. Intake and exhaust valves era made of steel with a solid stem. Valves are operated via pedestal mounting rocker arms.